One of the benefits of having clear blue skies on such an historic occasion as the Presidential Inauguration of Barack Obama is that someone can gather a satellite image of it.

The someone in this case is GeoEye.

Just take a look at some of these spectacular shots (courtesy of GeoEye and Cnet.com)

An overview of the eastern half of the National Mall during the January 20th Inauguration of Barack Obama. Click on the image to see it in high-resolution.

(Crowds with tickets to the inauguration (left) gather in chairs and standing areas at the base of the capitol steps (center). On the right, the US Capitol.

(Two large crowds gather around jumbotron screens at the base of the Washington Monument (center). Notice the line of buses along the street and the line of port-a-johns along the edge of the mall (top).

Out of the Mouths of Babes...

Palin is not McCain's Running Mate, but his Trophy Wife

A trophy wife, by definition, is an attractive, younger wife married to an older, affluent man, and she is regarded as a status symbol.

So, let's think... Sarah Palin is a younger woman paired to an older, affluent man as his vice-presidential running mate.

But is she, like a trophy wife, regarded as a status symbol by the McCain campaign?

Well, to answer that let's look at first, their reason to pick Palin. Was she selected for the GOPVP slot because of her experience and capabilities, or because she is a status symbol - an attractive conservative woman?

Well, if she was selected because of her experience and capabilities, then the McCain campaign would have no second thoughts proving her ability to be 2nd in command. She would be able to step into the political arena, answer the tough questions, defend her credentials, and survive the vetting process just as Hillary Clinton rode out the slings and arrows directed at her throughout her 2008 campaign.

If she were selected simply because she is regarded as a status symbol by the McCain campaign, then they would be very hesitant to allow any situation where she could be properly vetted or forced to answer tough questions. They would know she wasn't up to task and would go to great lengths to keep that from happening. Instead, they would parade her around to show off their status symbol and not let anyone hear what she really thought lest it embarrass the campaign.

So, let's reconsider the past month. How has the McCain campaign treated Sarah Palin. So far the McCain campaign has paraded Palin around for campaign stop appearances and had her recite stump speeches written for her by campaign staffers. Most notably, though, is that Palin has not yet held a single press conference. She has had an interview with Charlie Gibson where she did horribly, an interview with Sean Hannity where Hannity basically did all the work for her, supplying all the answers for her within his own question, and recently she was interviewed with Katie Couric, where she 'had to get back to ya' on McCain's experience in regulating. There was almost a press conference, but only the photographers and cameramen were allowed in, but then the McCain recanted and let the press in - for 40 seconds, then once again changed their mind and had the press escorted out of the building.

I just saw footage of her, as governor of Alaska, walking to work on some local hiking show. Surely she does not fear media exposure. So I can't imagine that it is Palin's own choice that she be shielded from the vetting process. And considering how badly she performed in these 3 interviews, I can only imagine her lack of media exposure is because the McCain campaign is trying to avoid being embarrassed by her lack of qualifications for the job.

So, will we get to see Palin debate? If my theory holds true, then the McCain campaign, seeing her not as a qualified running mate but as a 'trophy wife' status symbol, will work to derail her debate with Joe Biden.

Already the McCain campaign has called for changes to the format of the vice-presidential debate. My guess is that this is to help Palin out since she will be unevenly matched up against Joe Biden.

And today, sure enough, McCain is playing politics to withdraw himself and Sarah Palin from the presidential debates. I cannot imagine that he's doing it because he's too busy (Bush did the debate with Kerry in 2004 while serving as president).

Considering the manner in which McCain's campaign treats Sarah Palin, I conclude that she is not considered as a running mate, but as a trophy wife by the campaign.

Not as a partner, but as a token to score political points.

A woman objectified by a sexist campaign into nothing more than a status symbol.
Posted by Mapmaker in DC at 8:49 PM 0 comments

Palin - pinhead, inexperienced, and playing the gender card. So say the right-wing pundits. 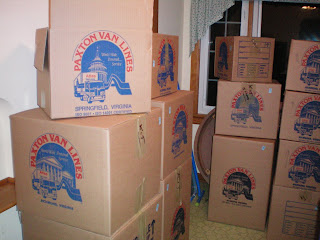 Kelly & I are moving away from Toledo to Washington DC. The movers have come and boxed up all of our things yesterday. Today the truck gets loaded, and by this time tomorrow Kelly & I will be on the road to DC looking for a new home. We have some leads in Kensington and Silver Spring so far, and by the end of the day we should have a lease hammered out.

Toledo has been my home for the past 18 years. Half of my life. I first arrived as a college student fresh out of high school from Canton Ohio at the age of 18. Over the years I made many friends, all of which are now scattered across the US (and Japan), while I stayed behind in Toledo to "hold the fort".

Well, I'm finally leaving Toledo. I'll make sure to get the lights on my way out...
Posted by Mapmaker in DC at 9:13 AM 3 comments

Mapmaker in DC
I'm a lifelong Ohioan come to Washington DC to help make a difference working for the government.